Lithuanian Skyscrapers — between Haste and Quality 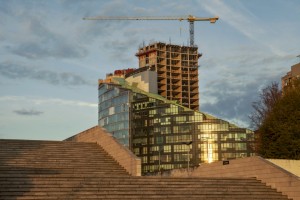 Probably one of the most common topics in terms of the role of architecture among other forms of art is the rather highly relevant aspect of longevity and inevitability. This becomes even more important in respect of the city centre: any solution of a larger scale not only has a direct influence on the functions of the most important part of the city for a relatively long time, but at the same time shapes the quality of the city’s image. If some project eventually turns out bad, this failure usually is there to stay and the citizens have to get used to it. It becomes a stain on a city’s face. During the years of freedom, architecture turned towards some of the largest projects involving high-rise buildings, the so-called skyscrapers, which started popping up in the centres of the Lithuanian major cities and not only there. Criticism towards high buildings date back to the Biblical times; however, just like height shouldn’t be referred to as the synonym of quality, it should not become a reason to refuse the idea of implementing a specific project either. Unfortunately, the comparatively unreasoned fear of heights haunts many of a famous urban theorist, while a number of rational people could be pointed at for cultivating the rather outdated cult of skyscrapers. 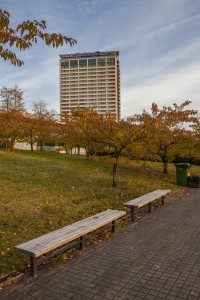 Let’s go back a little: the symbolic role of the architectural landmark is almost as old as the first of the great civilizations of humanity. One of its major functions in all times was the psychological effect on the viewer, intentionally or not highlighting the importance of the building in respect of others. At the turn between the 19th and 20th centuries a skyscraper became a direct symbolic outcome of the US economy, prospering on the other side of the Atlantic: induced by economic reasons, a high-rise building became probably the major signifier of a wealthy dreamland both to locals and many other impoverished people living on other continents.

No wonder that this symbolism was soon adopted by post-constructivist architects of the USSR, closely following J. Stalin’s megalomania and sense of aesthetics. The construction resulting from market economy and the specific structural conditions of US cities from the old New World landed on the plains of planned economy and became a pure symbolic tool of propaganda, which was supposed to represent this time purely ideological new new world and its triumph on Moscow’s horizon. Individual buildings, which were rather small, compared to the American ones, but huge, compared to the scale of the conservative old European cities, popping up in Western Europe would soon be labelled as “skyscrapers”. The temporary capital of Lithuania — Kaunas — was no exception: the press and locals used the same name to “baptise” the new and unusual five-six storey buildings, built in the thirties. It should be noted that not only back then, when nobody cared to define what a skyscraper was, but even today, despite the official and less official definitions, the minds of citizens interpret the meaning of the term of a skyscraper according to the context. In the Soviet Lithuania this word was unofficially used to refer to both the first high-rise residential buildings and the new high-rise hotels, which were supposed to become one of the major landmarks in the horizon of the larger cities. 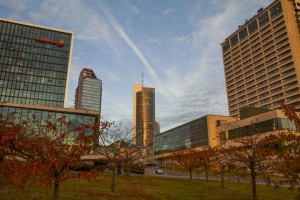 Although the idea to concentrate the new Vilnius city centre on the right side of Neris river was rather poorly thought through in respect of Lithuania’s changed economic, social and cultural status, also, as if continued the Soviet line and could be criticized on many levels, the reconstruction of Konstitucijos avenue, Europa complex, as well as the new Vilnius City Municipality building created a synergy of private and public capital, which was the first larger step in the development of Vilnius City. It seems that the beginning of the new era of the Lithuanian skyscraper was similar to many other architectural phenomena of the first fifteen years of Lithuania’s independence — haste, appeal to novelty or prioritising superficial ideas (in this case — the symbol it carries) versus the context (in some cases — architectural quality), as well as following the aspects of external tendencies of the world (usually already a little outdated). Talking of the first wave of Vilnius’ skyscrapers, the Harp residential building, which was stuck in a limbo for many years, could probably be referred to as one of the greatest failures, while the history of its origins meets all the above-mentioned criteria. The second wave of high-rise buildings, which symbolically began with the new Swedbank central office, as if closed the fashions prevailing in the first half of the decade and, leaving “the higher — the better” behind, returned to focusing on aesthetic quality. Although the number of skyscrapers recently built in the capital is relatively low, further development of the major architectural cluster of the city and positive architectural changes in smaller projects suggest that these changes will prevail. Especially as the already-mentioned Harp residential building (meant to be a part of a much larger complex) is more an exception than a rule: even if the first buildings were characterised by a rather chaotic pattern, they didn’t shade the architects’ common sense and the so-called New city centre managed to avoid greater misunderstandings.

In Kaunas’ case high-rise buildings didn’t even reach the physical level: a dozen of years ago the skyscraper as a symbol of a modern city and economic wealth, as well as competition with other cities did result in a number of projects for high-rise buildings, but almost all of them never left the primary stage of being a mere vision. Before the special plan for high-rise buildings in Kaunas, in the visions these buildings used to be distributed all over the city with no particular order and often with no second thought about the context. The fact that the arguments about “making the city modern” rather than based on the need for office buildings or the lack of useful space, offered not only by citizens, but also high officials of the city during a rather fierce discussion regarding, the implementation of a high-rise office building project, which was probably the closest to actually being implemented, does provide a certain picture of the situation back then. A need for a symbol of simulated economic drive was put first against high-quality architecture, the city’s historical landmarks or the need to have a systematic strategy to arrange such buildings. The latter was prepared only after several years and is much more conservative than the ones of Vilnius or Klaipėda, offering high-rise buildings only a small area in lower terrace of the city along Žemieji Šančiai.

The situation in Klaipėda is the most interesting: the high-rise buildings constructed here in the recent decade were mostly built for residential purposes and seem rather scattered along the perimeter of the city. Some of them were started and completed before the plan for high-rise buildings in Klaipėda with no concept: just like in case of Vilnius, several buildings popped up in the centre of the city, in the neighbourhood of contextually high buildings (currently the Music Theatre and Klaipėda Hotel), formed back in the Soviet era. However, differently from Vilnius, the landscape of Klaipėda was distorted already after the war by eliminating the church towers, characteristic to old European cities: thus, the construction of new high-rise buildings in the historical city centre near the verticals of the Soviet era could be interpreted in two ways: both as a neutralising agent and a Soviet tendency for surrogate verticals. Individual high-rise buildings distributed along the entire city and lack of the major architectural cluster slightly refers to the city landscape before the war, with church towers similarly distributed all over the town. However, in a way this confines the idea to rebuild some of the former landmarks of the old city: the new buildings were designed with no reference to the theoretical possibility of their existence. From the symbolic perspective, in case of the Lithuanian port city, a skyscraper is not only the already-mentioned symbol of progress, but also a result of a need for verticals that almost ceased to exist.

In conclusion, it could be said that the haste of building skyscrapers in the first half of the first decade of the 21st century resulted in all three major Lithuanian cities adopting plans for high-rise buildings only after the constructions had started (Vilnius, Klaipėda) or after several years of discussions (Kaunas). The situation in the capital and the port city was determined by an inert development of architectural clusters or their rudiments on locations designated to such under Soviet circumstances or random places altogether. Meanwhile, aside from economic reasons, in certain cases the beginning of a rather chaotic development was based on appellations to novelty and symbolism. As a finishing note, we should also say that the current consensus regarding the early post-colonial architecture states that one of its characteristics is the rush to fill the city with as much new architecture as possible, in order to make an impression solely by its scale. Very similar neo-post-colonial tendencies could be observed in the Eastern Europe after the fall of the iron curtain: Lithuania was no exception, but only for a short time.